One of the more surprising lessons of the pandemic was that many of Europes poorer countries and regions in the east and south handled the initial wave far better than their wealthier neighbors, thanks in part to a mix of luck and timely government action.

In many of these cases, the number of “excess deaths” above average was only a modest blip — or sometimes nonexistent. (This metric has become widely used to measure the pandemics toll across the globe.)

Erring on the side of caution, and lacking the resources of their richer counterparts, the countries moved quickly to shut their borders and hunker down. The rapid response has meant that their underfunded health care systems havent been thoroughly tested like those of their richer neighbors.

But as rates of infection start to rise again across the bloc, theres no guarantee these countries will emerge unscathed in a second wave. Romania, which at first had relatively few cases, saw infections soar starting in July. Hungary recently declared it is closing its borders, in a return to a policy implemented at the start of the crisis.

Meanwhile, Poland is recording rates nearly double those from earlier this summer. Campania, a southern region of Italy that was basically untouched in the spring, had the countrys highest number of new cases on August 30, and sits at fourth place for the number of current cases overall, according to government data.

Experts doubt a repeat of the spring chaos is likely. For one, theres much more information about COVID-19 now. Doctors have gotten better at treating infections, and people know about the importance of masks and social distancing. Whats more, testing rates have gone up significantly, making any direct comparisons with the spring unreliable.

Nevertheless, some epidemiologists fear that the colder fall weather could give further impetus to the virus. At the same time, the regular flu season will put stress on hospital systems.

This means countries in the east and south of Europe must walk a thin line between a return to draconian lockdown — and the social and economic consequences that entails — and letting the virus run riot.

This task is all the more crucial given that some of them have the most fragile economies in the bloc.

All quiet on the eastern front

One of the pandemics key lessons was that the more quickly and decisively countries acted, the better.

Poland exemplifies the combination of luck and rapid response. Aneta Afelt, a researcher at the University of Warsaws Interdisciplinary Centre for Mathematical and Computational Modelling, noted the country was fortunate in that its first cases probably arrived by land, making those patients much easier to isolate when compared with those who arrived by air. In addition, Polands relative insignificance as an air transit hub was a plus.

“The first case officially appeared in Poland on March 4, and on March 11 the country was already closed,” said Afelt, whos also a member of the scientific board fighting against COVID-19 at the Ministry of Science and Higher Education.

At that point, the country had fewer than 70 cases and two deaths.

That sort of swift reaction stands in contrast with countries such as the U.K. or the U.S., which were among the last major countries in March to order strict measures.

“The density of the population is quite different [when compared with Western Europe],” she said. Rather than large urban clusters, “we have 44 to 45 cities with around 100,000 or more inhabitants spread throughout Poland.” 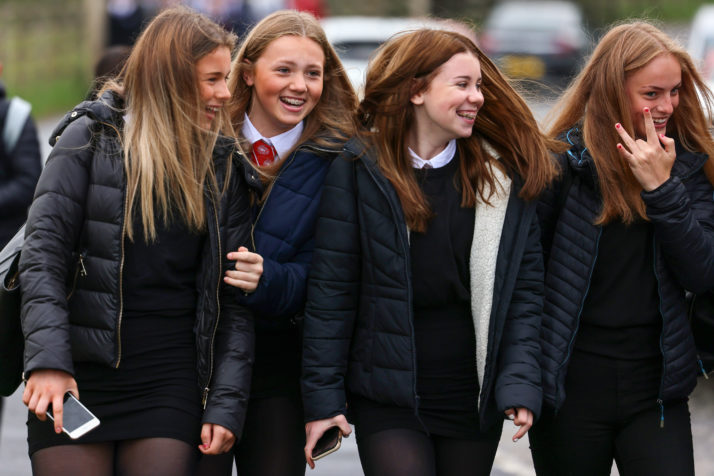 Franciszek Rakowski, an assistant professor also from the Interdisciplinary Center for Mathematical and Computational Modeling, agrees, noting that its population “is more evenly spread … than in Western countries.”

He also pointed to the role of well-timed government measures, such as closing all schools and universities and the halting of much commercial activity, in slowing the spread.

Poland still looks to be in a strong position compared with many other countries. Its COVID-19 death toll to date is around 2,000, while its “excess mortality” rate is negligible.

Still, Afelt and others are now worried that these hard-won gains are slipping away. The initial widespread fear of the virus has given way to skepticism, even disbelief, in some quarters. Meanwhile, the countrys infection rate keeps trending higher.

Imre Kacskovic, the dean of the faculty of science and former head of the immunology department at Budapests Eötvös Loránd University, helped organize the schools pandemic response. He found the news coming out of Italy in late February “terrifying.”

Once the first case in Hungary was identified — from Iranian students returning from visiting home — the university promptly wound down activities.

“We had this first cluster, and [university] leadership took a very cautious stance, allowing students and teachers to stay home and go into home quarantine,” Kacskovic explained. “After two weeks, the general ban of face-to-face education was introduced.” 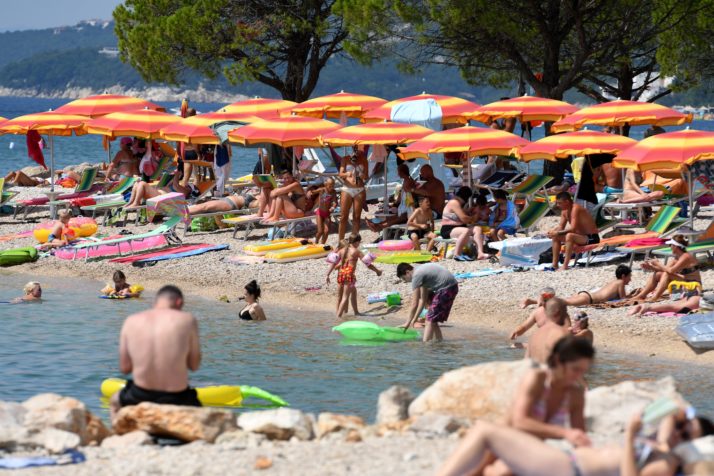 Crowds of people in Crikvenica, on the northern Adriatic coast of Croatia in mid-August | Denis Lovrovic/AFP via Getty Images

The first two diagnosed cases were announced on March 4. Less than two weeks later, when it had only around 50 cases and one death, the country closed its borders, and on March 28, it announced a full lockdown.

“The government took strong action quickly, but its important to emphasize that its one side of the coin,” Kacskovic said. “The other side [is that] the people followed. Government asked the people what to do and they behaved.”

Now, with the university reopening, hes focusing on making sure staff and students are safe. Laboratory-intensive classes have been front-loaded at the start of the semester, for example, to make sure that students can be in the same room as their professors while case numbers are still low. 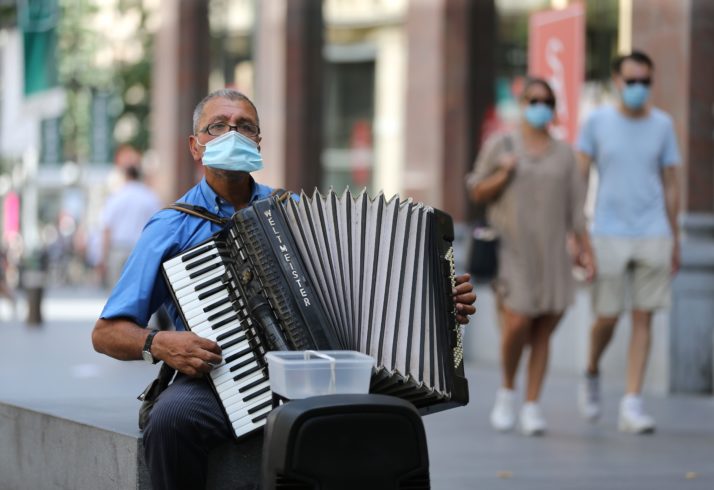 An accordion player wears a protective facemask as he plays on a street in Antwerp, Belgium | François Walschaerts/AFP via Getty Images

This approach continues to require some sacrifice on the part of students. This year, the university decided to not hold its traditional welcome camp for newcomers before the new semester. That decision proved wise once it became clear that universities that did hold such events reported new outbreaks.

Still, for experts like Kacskovic, those measures are worth it. Hungary remains one of the least hard-hit European countries, recording only 615 deaths to date linked to COVID-19. But whether that will remain so going forward is an open question.

Kacskovic said that his countrys health system is “decent,” but noted it has suffered from a brain drain of doctors to its Western neighbors.

While Italys prosperous north was the outbreaks epicenter, the struggling south — long known for substandard health infrastructure — escaped largely untouched. Government-compiled excess mortality figures show, for example, that in Lombardy in April, excess mortality rates had more than doubled compared with average deaths in 2015-19. By comparison, in Campania and Sicily, they were a touch below average for that same period.

Meanwhile, at the start of the pandemic, the core southern regions of Sicily, Apulia, Campania (which contains Naples) and Calabria — with a total population of 16 million — had less than 1,000 critical care beds combined. Corruption and chronic mismanagement meant that scarce financial resources were often squandered.

The souths advantage was timing, according to Pierluigi Lopalco, epidemiology professor at the University of Pisa and the head of a task force coordinating the response in the Apulia region.

Tourism in Greece remains battered, despite Athens efforts to market itself this summer to travelers eager for the sun.

In effect, despite a last-minute rush of departures, the lockdown was able to slow the spread of the virus southward. That decision gave the regions of the Mezzogiorno more time to prepare their hospital staff and intensive care facilities with the necessary protective equipment and machinery for a respiratory pandemic, he explained.

“We can talk of a first wave that hit the center and south completely differently [than the north],” he said.

Across the Ionian Sea, Greece was also able to escape largely unaffected.

Gkikas Magiorkinis, assistant professor of hygiene and epidemiology at the National and Kapodistrian University of Athens, pointed to two factors that protected Greece. The first — similar to Hungary and Poland — was speedy implementation of measures like lockdowns and school closures relative to the first cases and deaths recorded.

The country recorded its first case in late February, with the first death two weeks later on March 12. On March 23, it imposed a severe lockdown, at which point it had recorded 624 cases and 15 deaths. 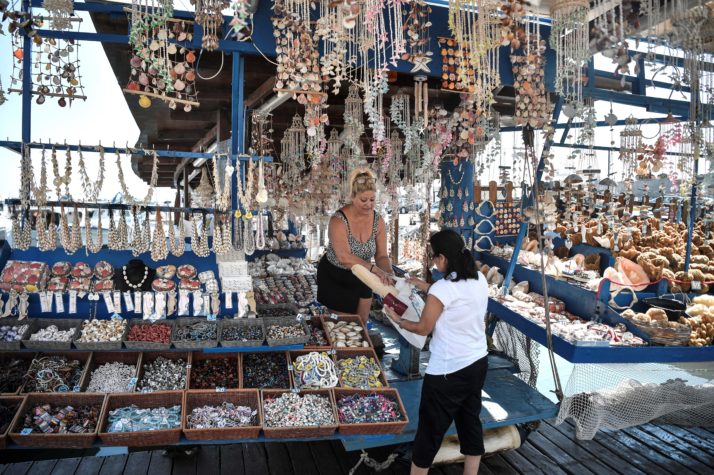 Magiorkinis said another key factor was controlling the spread in hospitals and care homes by limiting exposure.

“People were, in general, discouraged to go with mild symptoms to the hospital,” Magiorkinis said. This prevented people from gathering in waiting rooms and creating unnecessary risks.

Even though the country is now out of lockdown, life in Greece isnt back to normal. There are strict rules requiring face masks, while large gatherings in public arent allowed. And tourism remains battered, despite Athens efforts to market itself this summer to travelers eager for the sun.

Still, despite a surge of cases in early August, the situation in Greece appears to haveRead More – Source

Some people ‘genetically wired’ to avoid some vegetables

Mother of all EU summits