Nail-biting, gripping and unpredictable — not three adjectives you would normally associate with a vote on two technocratic agencies.

But the vote on the relocation of the European Medicines Agency and the European Banking Authority from London had us on the edge of our seats. Amsterdam will host the EMA, while the EBA was awarded to Paris. It was by no means a straightforward process, with both votes ending in a tie (and ultimately being decided with Estonia drawing slips of paper out of a plastic bowl) of 13-13.

From a rebuffed Eastern Europe to a revamped Paris, there’s a lot to digest from the vote, which took place among the remaining 27 EU countries in the Council on Monday.

POLITICO gathered five key takeaways from the dramatic EU vote that some would say puts Eurovision to shame.

1. Eastern and Central Europe got snubbed

So much for EU equality. It was only few months ago that Commission President Jean-Claude Juncker spoke of an EU “of equals,” where “its members, big or small, East or West, North or South,” would all be treated the same.

Monday’s vote threw Juncker’s talk of equality into disarray, as the EU capitals clearly showed a preference for keeping Brexit’s most prestigious prizes in the hands of Western European countries.

“It’s a disappointment,” said a spokesman for the Czech representation in Brussels. “Geographical balance was supposed to be a criterion [in the process]. This wasn’t fulfilled.” Warsaw reacted similarly. “We’d have been happy for our region to host one of those agencies,” a Polish diplomat said, requesting anonymity. “This was very important when we were establishing the criteria for one of the [agencies] so that there would be a geographical balance. That didn’t happen either unfortunately.”

“It’s clear that it leaves a bitter taste to lose with a random mechanism, with a ball extracted … on a tossed coin there’s no possible political influence” — Italian EU Affairs Minister Sandro Gozi

Czech and Polish representatives refrained from expressing their disappointment during the voting process, one diplomat in the room told POLITICO. “There was no reaction as such,” the Council official said. “There were some human reactions. Some smiled and some smiled less.”

The Slovakian response was much clearer, with Bratislava abstaining from voting in the second and final rounds in protest, resulting in a tie between Amsterdam and Milan.

The “anything” that many predicted would happen, happened, but not in the way people expected it to.

Instead of the agencies ending up in some place nobody saw coming, it was left to chance. Despite all the lobbying and promises of NATO troops from the Italians and the Irish withdrawing from the EMA race to focus on the EBA, the hand of the Estonian Deputy Minister for EU Affairs Matti Maasikas was unlucky for Milan and Dublin: Amsterdam won the EMA and Paris nabbed the EBA.

The Italians managed to convince 12 other countries with their charm and promises, but that ultimately didn’t matter. “It’s clear that it leaves a bitter taste to lose with a random mechanism, with a ball extracted … on a tossed coin there’s no possible political influence,” Italian EU Affairs Minister Sandro Gozi said upon leaving the General Affairs Council meeting on Monday evening.

The hazard of the final decision in both cases showed not only how tight the race was, but also how divided the 27 remaining countries of the EU are, with only one abstention (from Slovakia) enough to lead to a perfect stalemate.

And though the process was prime for political decision-making, a bid that consistently came out on top based on non-political criteria for the EMA relocation carried the day. In the few analyses that ranked bids, Amsterdam consistently came out on top, excluding criteria such as geographical balance. It was the favorite in EMA staff’s ranking of cities they would prefer to relocate to from London. In an assessment commissioned by the EU’s drug industry lobby EFPIA, Amsterdam came in second best in a tie with Brussels, after Copenhagen.

But Amsterdam ranked behind Copenhagen in the EFPIA review because it won’t quite be ready for the medicines agency in time for Brexit. Conference facilities for the EMA will be ready by the first days after Brexit, Wouter Bos, the Netherlands’ special ambassador for the EMA, told POLITICO. But some of the office space may not be complete for another five or six months after that.

3. Paris, the new City of London

Although the EBA may not bring the economic spoils that the EMA promises, it represents something much bigger for Paris — the chance to be the new financial center of the EU.

With London and the U.K. out of the bloc, countries are vying to attract the biggest banks, financial infrastructure, and other City firms into their capitals. While investment firms are still finalizing their contingency plans for when Brexit takes effect, other financial centers in the EU are already battling to become the go-to city for relocating banks. Placing the EBA in Paris means it has two major financial watchdogs — it will join the markets authority, ESMA. So, if a bank was deliberating between croissants or currywurst, this could help make up its mind.

As French President Emmanuel Macron tweeted following the result: “It’s a recognition of France’s attractiveness and European engagement. Happy and proud for our country.” 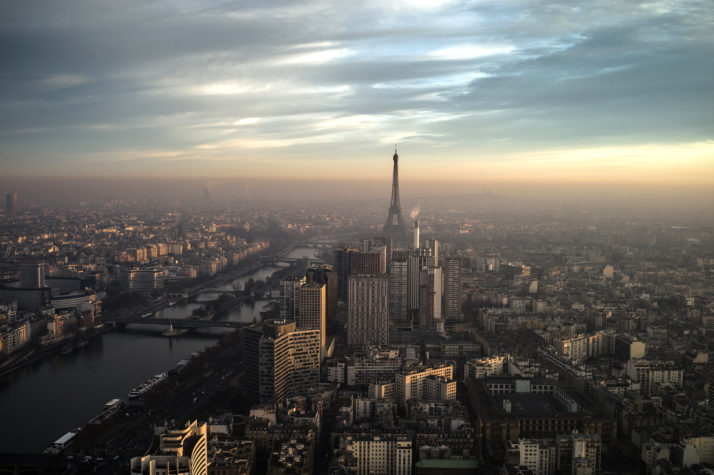 4. Germany not on its game?

This vote couldn’t have come at a worse time for Germany, which is in the midst of a government crisis. For onlookers, Frankfurt was a sure-fire winner for the EBA — it would have been a natural addition to the European Central Bank (ECB) and the insurance watchdog — but it didn’t even make it to the final round of voting. (This despite reports that it made a deal with Greece over support for respective EMA and EBA bids.)

So what went wrong? One theory is simply that Chancellor Angela Merkel has her hands full right now, and for good reason. Berlin doesn’t have the capacity at the moment to be making sweetheart deals with other countries, because of the political limbo facing the government after the collapse of exploratory talks involving Merkel’s Christian Democrats and their Bavarian sister party, the Christian Social Union, plus the liberal Free Democrats and the Greens on Sunday night.

However, the Germans may not be too disappointed with the outcome given their already dominant power in the EU. Plus, this opens up Germany to getting what it really wants — the presidency of the ECB. Once current ECB President Mario Draghi’s term expires, it could be Bundesbank President Jens Weidmann’s turn. Getting the EBA could have proven detrimental to that goal.

5. The bowl wins, the UK loses

After rounds of behind-the-scenes horse trading and negotiations, one kingmaker emerged: a plastic bowl — or maybe “cheap glass,” according to an EU official in the room.

Tied votes meant that the final two contenders for both agencies had their fate determined by lots drawn from the humble vessel. The 13-13 scores occurred because one country abstained in the last round. While it’s unclear which country didn’t vote in the EBA race, Slovakia’s abstention in the EMA race was a protest move: Health Minister Tomáš Drucker said they sat out the second- and third-round votes because no newer member countries made it past the first round of elimination.

While the vote exposed lingering tensions among the EU27, the clearest loser was the U.K. There’s no going back on Brexit now that its prize agencies have been promised elsewhere. The relocations are “a direct consequence — and the first visible result — of the United Kingdom’s decision to leave the European Union,” the Commission noted after the vote Monday.

“London’s loss is Amsterdam’s gain,” said Steve Bates, CEO of the U.K.-based BioIndustry Association, which represents the life sciences industry. “Today’s decision on the location of the European Medicines Agency means 1,000 high quality jobs leaving the U.K., disrupting 1,000 families as a direct result of Brexit, with implications for thousands more.”

Belgium looks to steer away from company cars