Now Dr. Grigory Rodchenkov is urging Russia to "do the right thing" and admit it.Follow @cnnsportRussia has consistently denied the claims of Rodchenkov — the former head of Moscow's anti-doping laboratory — which formed the basis of the 2016 McLaren Report's conclusions that more than 1,000 athletes benefited from a systematic doping program between 2011 and 2015.The Russian ministry for sport continues to reject the report's findings, though an International Olympic Committee (IOC) panel has, this week, banned a further eight Russian athletes over cheating at the 2014 Sochi Winter Games, taking the total number to 22.READ: I have received threats, says anti-doping chief READ: Doping report alleges 'institutional conspiracy'READ: Russia needs to 'show contrition'

'His goals are not political'

The IOC has also crucially backed Rodchenkov's evidence, describing him as "a truthful witness." Rodchenkov left his family in Russia to seek refuge in the United States, where he is currently enrolled in a witness protection program. His American lawyer, Jim Walden, released a statement on Tuesday in response to the latest findings by the IOC commission."His facts have been verified in every way imaginable," said Walden. "Dr. Rodchenkov's goals are not political. Nor does he seek to do unnecessary harm to Russian athletes. He seeks only truth, reform, peace, and safety. "The World Anti-Doping Agency (WADA) has demanded that Russia accept responsibility for its state-sponsored system. To date, Russia has refused to do so, choosing to falsely blame Dr. Rodchenkov as if he acted alone. "WADA's policies forbid retaliation against whistleblowers, yet Russia continues to ignore this fact, seeking instead to silence Dr. Rodchenkov. "The time has come for Russia to do the right thing and admit its past transgressions for the benefit of Russian sport. Russia's continuing intransigence is the greatest yoke around the necks of Russia's athletes." 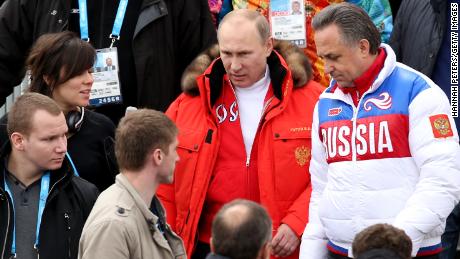 Russia continues to fight the allegations made by Rodchenkov, who in July 2016 was described by President Putin as "a man with a scandalous reputation."Indeed, the Russian government's Investigations Committee claimed on Tuesday that the doctor had personally given drugs to the athletes, who were unaware they were taking banned substances. '"It was established that Rodchenkov personally supplied the athletes and coaches with medicines whose proven features were not known to them but which later were established to constitute performance-enhancing drugs," read a statement on the Investigations Committee website."Having destroyed the doping tests of athletes and having accused Russia of implementing a doping program, he concealed the results of his criminal activities in the Anti-Doping Center."Specific facts of the crimes committed by him, related to the manipulation of the results of athletes' doping tests, have been established during the investigation."Russia was top of the medal table at the end of the 2014 Sochi Olympics but — factoring in their athletes who have been stripped of their medals — has now dropped behind Canada, Norway and the US.The Russian government has vowed to defend the interests of those athletes who have been punished."One can hardly steal a victory that has already been won, especially a victory that will forever stay with our hero athletes," said Kremlin spokesman, Dmitry Peskov, on Monday.Go toCNN.com/sport for more stories & features"The main thing is to persistently and energetically take all possible measures to protect our legitimate interests and the legitimate interests of our athletes together with international sports organizations."The IOC Executive Board will meet in Lausanne, Switzerland, next week to decide whether Russia will be banned from competing at the 2018 Winter Olympics in Pyeongchang, which start in February.

Anthony Joshua tells Dillian Whyte he can have rematch in April