Pep Guardiola is revelling in Manchester City’s mastery of ‘Fergie time’ as another late goal saw them equal the Premier League record for consecutive wins.

City’s 2-1 defeat of West Ham took their run of victories to 13 in a row, levelling the best ever single-season streaks, and also continued their happy habit of striking in the closing stages.

Angelo Ogbonna’s surprise opener was cancelled out by Nicolas Otamendi, opening the way for David Silva to snatch an 83rd-minute winner.

Their last three games have been decided in the 96th, 88th and 84th minutes, leaving Guardiola to ponder the inheritance of a crown once worn across the city by Sir Alex Ferguson.

The great Scot’s Manchester United teams were renowned for fighting right to the end, through healthy stretches of injury-time, and City are happy to be following suit.

“I heard about the Fergie time, I was not here (in England) in that period, but of course you have to have that,” said Guardiola, whose side reclaimed their eight-point lead over United ahead of next week’s potentially record-breaking Manchester derby.

“What we have shown in the last games is we never give up. If we can take something about the Fergie Time, it is welcome, a pleasure.”

On his side’s purple patch of form, Guardiola added: “It’s important for us to keep our moment in terms of victory. It means we have done 39 points in a row, so it’s a lot.”

The City boss has also hinted that he has found a solution to the extreme defensive tactics he has come up against in recent weeks.

Huddersfield, Southampton and West Ham have all caused City problems by sitting deep and invited them to unlock packed penalty areas, but Guardiola has hatched a new plan.

He sent Gabriel Jesus on alongside Sergio Aguero, with Leroy Sane and Raheem Sterling taking the wide roles in a lively front four.

“Today I learned a bit, like a manager, to tackle it differently,” he said. “We don’t normally play with two strikers and two wingers, but we did so it is a lesson.”

Hammers boss David Moyes has now overseen three defeats and a draw since taking over from Slaven Bilic, but insists things will soon be looking up.

His team sit 19th in the table, with Chelsea and Arsenal their next opponents, but the Scot is refusing the repeat the overly pessimistic tone he struck at Sunderland.

“I always think we will get away. I don’t think we will be in trouble,” he said. “I think we have a good team, good players. I thought this performance gives us hope it can be done.

“I really want the football to be attacking, but we are playing against a team that we can hardly get the ball so what are you going to do?

“I said to the boys if we do that against the other top teams we will give ourselves a chance and, as everyone knows, we’ve got a lot of the top teams coming up in the next few weeks.” 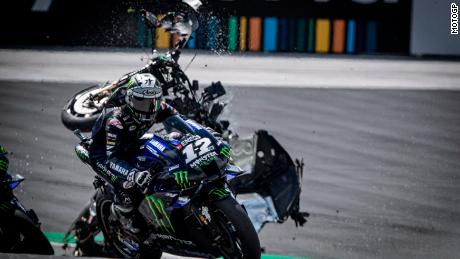 Despite injuries to Wade and Stokes, K-State defeats Georgia State 71-59