If you've never heard of Tatar Muslims, then you're unfamiliar with the Soviet Union's campaign of terror against this Turkic-speaking minority. Even if you know about Joseph Stalin's use of atheist militias to drive this indigenous population of Crimea into extinction, you might not be aware of Russia's more recent and ongoing effort to ethnically cleanse this little-known Muslim minority.

"It's very likely that tomorrow, Crimean Tatars will be declared the most terrible criminals, and this will be the pretext for a new genocide," Mejlis leader Zair Smedlyaev said in a recent interview with Al Jazeera.

The Mejlis was founded in 1991, after the collapse of the Soviet Union, as a representative body meant to convey Tatars' issues and address their grievances to the Ukrainian central government, the Crimean provincial government, and international institutions.

When Russia formalised its illegal occupation of Crimea in 2014, however, the Mejlis chose to sit out the Kremlin-held referendum for fear that the horrors of Stalin's Soviet Union – which resulted in the starvation of half of the Tatar Muslim population during the postwar period – would be revisited upon them.

When Tatar Muslims refused to cooperate with Russian-Crimean authorities, the Kremlin accused the Mejlis of being an "Islamic extremist" organisation, labeling them as "separatists" and "terrorists," and then implemented a slew of laws that included bans on public gatherings of Tatar Muslims and on their religious books.

Russia … is persecuting Tatar Muslims in direct violation of international human rights laws and norms, arresting and incarcerating many by equating non-violent protest and speech with acts of terrorism and extremism

Russian politicians have made no secret of their sinister intent to ethnically cleanse Crimea of 250,000 Tatar Muslims, in what they call "de-Turkification," with some urging Crimea to be renamed "Tavrida" or "Tavriya" to separate the Crimean Tatars from the "land on which they arose and evolved".

In 2017, the United Nations Human Rights Monitoring Mission in Ukraine released its first report on the human rights situation in Crimea, concluding that conditions for Tatar Muslims had "significantly deteriorated under Russian occupation".

According to Human Rights Watch, the Russian Federal Security Service (FSB) is conducting regular nighttime home raids of Tatar Muslims who express criticism of Russia's occupation either in public or online, observing that many have been arrested, tortured and imprisoned for merely discussing interpretations of the Quran or other Islamic texts.

A Crimean Tatar Muslim who worked as a grocer at a local market in his hometown of Nizhnegorskiy was detained on 13 September 2017 on suspicion of being involved with an "extremist" group. After kicking down the front door of his home, FSB agents hog-tied Renat Paralamov and dragged him to a waiting van in front of his wife and children. For more than 24 hours, his family had no information about his whereabouts, according to Human Rights Watch. 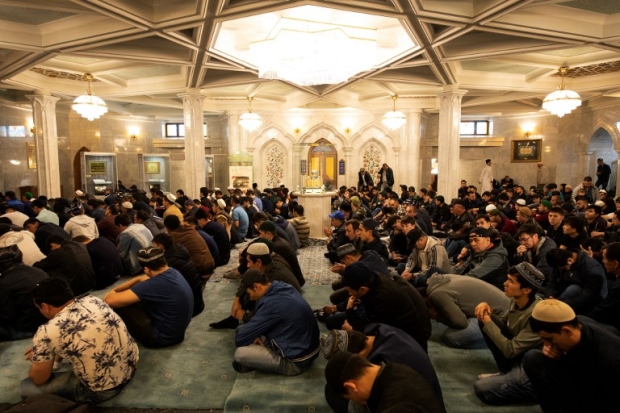 In custody, the FSB "put a bag over his head … and tortured him with electric shocks". They also "punched him in the chest and hit him on the back of his head," with the agents ultimately demanding he work for the FSB as an informant, attend Tatar Muslim gatherings, and pass on the information.

Paralamov fled with his family to the Ukraine, joining more than 40,000 other Tatar Muslims who have done likewise since the Russian occupation began in 2014.

A Tatar Muslim who fled to Turkey in February and sought asylum told me how he was arrested and beaten after merely expressing his opposition to Russia's occupation to a friend at a local coffee shop. "I don't belong to any separatist or extremist group," he said. "What Russia is doing is not right, and I think many more [Tatar Muslims] will try to leave their homes soon."

As an occupation force, Russia is mandated by international law against the practice of criminalising activity that was not previously criminalised in Crimea, and is bound to "respect the rights of Crimean residents, including those of freedom of opinion, expression, assembly and association, and religion, freedom from arbitrary detention and ill-treatment including torture, and rights to fair trial, due process, and privacy".

Russia, however, is persecuting Tatar Muslims in direct violation of international human rights laws and norms, arresting and incarcerating many by equating non-violent protest and speech with acts of terrorism and extremism.

How Russian arms sales help to keep the Gulf divided

The goal of Russia is clear: to further entrench its illegal occupation and annexation of Crimea by seeking to eliminate the territory's indigenous population. Its aims and methods are no different than those used by Israel against the Palestinians; Myanmar against the Rohingya Muslims; China against Uyghur Muslims in East Turkestan; and India against Bengali refugees in Assam.

In 1920, Russia's Vladimir Lenin reportedly wrote about his intentions to annihilate the Tatar Muslims of Crimea, promising: "We will take them, divide them, subjugate them, digest them."

– CJ Werleman is an opinion writer for Salon, Alternet, and the author of Crucifying America and God Hates You. Hate Him Back. Follow him on Twitter: @cjwerleman

The views expressed in this article belong to the author and do not necessarily reflect the editorial policy of Middle East Eye.