The choice of Amsterdam and Paris as the new homes for two EU agencies leaving London fueled criticism in Central and Eastern Europe that newer members of the bloc are treated like second-class citizens.

The kerfuffle over Monday’s votes to pick new locations for the European Medicines Agency and the European Banking Authority — both uprooting from the British capital due to Brexit — was the latest sign of an East-West split, also laid bare by issues such as migration policy, rule of law and even the quality of ingredients used by international food brands.

Slovakia’s leadership is the most openly upset about Monday’s votes. Bratislava was considered a leading candidate to host the EMA, but did not make it past the first round of voting, with Amsterdam winning out in the end.

“We do not hide disappointment over the fact that our bid did not succeed despite an excellent offer,” said Peter Susko, spokesman for Slovakia’s foreign ministry.

“The citizens of the newer member states expected an opportunity to prove their readiness to host such an important agency as the EMA,” he said, adding that the chance to make a decision based on geographical balance had “fallen through the floor.”

Bratislava was not the only city from among the EU’s newer, ex-communist members hoping for a Brexit bonus from the agencies moving out of London.

For many politicians in Central and Eastern Europe, the failure to bag even one of the agencies was symptomatic of a wider problem.

Bucharest, Warsaw, Sofia and Zagreb all mounted bids to host the EMA. The Croatian capital withdrew hours before the voting, complaining the selection procedure did not take into account all the agreed criteria but “arbitrary findings of the EMA.”

Prague and Warsaw vied to host the banking authority, which went to Paris.

Fears that the process could exacerbate East-West tensions were manifest in the run-up to the vote. Rumors swirled of a deal brokered by Germany to make sure the spoils were shared — Frankfurt would get the banking body while Bratislava would get the medicines agency. But an EU diplomat said before the vote that such a deal existed “only in journalists’ minds.”

For many politicians in Central and Eastern Europe, the failure to bag even one of the agencies was symptomatic of a wider problem.

“This decision may rather reflect the existing difficult relationships and weakened trust between the EU’s old members and some Central European new member states as they seem to perceive the current and future EU in different ways,” said Petr Ježek, a Czech MEP from the ANO party of billionaire Andrej Babiš that won the country’s recent general election.

Some governments are already suggesting the outcome of the selection process bodes ill for Central and Eastern Europe’s role in upcoming discussions on the EU’s post-Brexit future.

Central and Eastern Europe was “ignored by many western European member states,” Takács said, adding that “it’s not a good message, when we need to make very serious decisions about the EU’s future.”

Polish MEP Ryszard Czarnecki, a member of the governing Law and Justice party, said the decision on the medicines and banking agencies was reminiscent of George Orwell’s Animal Farm, in which “some animals are more equal than others.”

“Those decisions can in practice increase distrust between EU countries,” he said. “Two-speed Europe already exists. The decision to choose Amsterdam and Paris will increase Euroskepticism in Central and Eastern Europe. I think that is very short-sighted, and a strategic mistake.”

Central and Eastern European countries did not exercise solidarity by voting only for each other.

The Polish government apparently sought to put a brave face on failing to land either agency. The government chose the day after the vote to officially open the new Warsaw headquarters of the EU’s Frontex border security agency, which has already been operational for some time. The visit sent the message that Poland had already secured one EU body, even if it had missed out this time.

“I am very happy that the Frontex agency will develop here in Warsaw. I hope that this day will go down in history and that it gives us good perspective for future and for the safety of Europe,” Prime Minister Beata Szydło declared at the opening ceremony.

The failure of any of the EU’s newer members to land either the EBA or EMA — along with economic boost they would have brought — was, however, a more complex story than a simple East-West split. Central and Eastern European countries did not exercise solidarity by voting only for each other, a national diplomat from the region noted in Brussels.

Bratislava, for example, obtained 15 votes in the first round of voting for the EMA — which means many of its fellow easterners, who each had six points to distribute among three cities, did not offer much support. 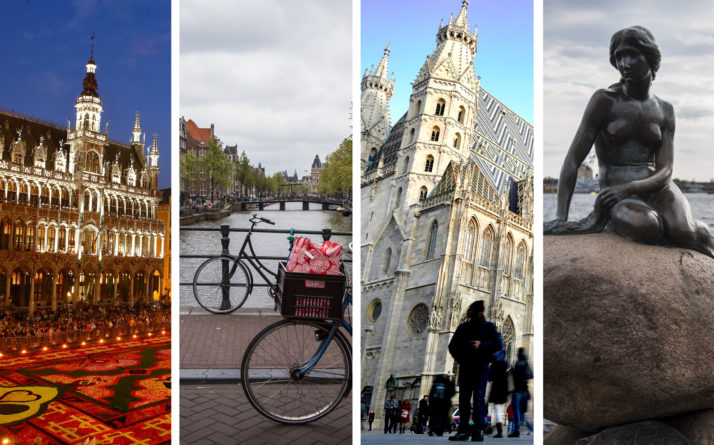 From left: Brussels, Amsterdam, Vienna and Copenhagen were among the candidates to host the EMA | Source images via Getty Images

Goodies offered by Western European countries to their eastern neighbors may have been one reason the voting did not spile along neat geographical lines. Romania, itself in the running for the EMA in the first round, voted for Milan, Italian EU Affairs Minister Sandro Gozi revealed on Monday.

In exchange, Italy promised to support Romania getting a future EU body, such as the European Labour Agency, according to one diplomat with knowledge of the talks. The agency does not exist yet but was proposed by Commission President Jean-Claude Juncker in his State of the Union address in September.

Italy also promised to back Romania joining the borderless Schengen zone, said the same person, who spoke on condition of anonymity. Romania has not been able to join Schengen for years due to opposition from countries like the Netherlands and France, even though the Commission has said it complies with the technical criteria to become a member.

Use honey first for a cough, new guidelines say

Is the clock change worth it?

May intervenes to speed up new UK immigration plan