As Poland went to war with the European Union this year — over the rule of law, the environment and refugees — the digital arena was one where the country could outshine its European neighbors and prove it belonged in the club.

In Brussels and beyond, Poland’s Digital Minister Anna Streżyńska is known as a pragmatic voice in a government dominated by fierce, Euroskeptic Law and Justice loyalists.

She’s also the face of a different Poland: a digitally savvy, modern country with a tech sector geared for growth that’s attracted tech titan Microsoft and a Google campus and thrived despite the government’s increasingly confrontational tactics.

Now, the possibility that she could lose her job in a widely expected government reshuffle could put the last of Poland’s leverage in Brussels at risk.

If its digital ministry gets the ax — or Streżyńska is replaced by a less ambitious minister — one of the last points of cooperation between Warsaw and Brussels could be severed. This would jeopardize not only Poland’s ability to influence the policy but its legitimacy in the EU capital.

“Digital changes all of society,” said Michał Boni, Poland’s former digital minister under the previous Civic Platform government and a European People’s Party MEP. “It’s a question of the economy, of education … of privacy, of cybersecurity. The destruction of the ministry would be a step back. We would fall out of the game.”

Poland, he added, needs someone “who can lead.”

Even as Warsaw’s top brass has largely alienated the highest ranks of the European Commission, Council and Parliament, Poland’s digital policymakers have worked as part of a group of about a dozen “like-minded” liberal countries — including Sweden, Denmark, the U.K. and Estonia — leading the charge on digital issues.

With Britain preoccupied with its imminent departure from the bloc, Poland — known for its army of highly skilled coders and technical experts — has emerged as the group’s largest member country and a potential leader on major digital issues.

That’s where Streżyńska, who took over the portfolio in 2015, comes in.

In setting out to overhaul the country’s digital agenda, she looked to Estonia and the U.K. for blueprints on how to become competitive in the digital sphere and became a champion of digital public services, facilitating the rollout of 5G connectivity and broadband connections to schools. In a key move, she also set out to build up the country’s image as place of opportunity for digital entrepreneurs.

Despite recent strides, Poland still has a long way to go before becoming a European leader on tech. The country ranks 23 out of 28 on the EU’s digital economy and society index, lagging significantly on everything from the use of social media by enterprises (only 9 percent) to subscriptions to fast broadband across the country.

Streżyńska’s lack of partisanship — she refused to join a political group or align herself with Jarosław Kaczyński’s ruling Law and Justice party — was a welcome signal to consumers, stakeholders and policymakers in Brussels, but increasingly put her at odds with her bosses.

Streżyńska — who worked as a civil servant in telecoms and competition policy for much of her career — was seen by many as a remnant of a more progressive government. In staffing her ministry, she turned a blind eye to party politics and became known for working with Poles from across the political spectrum. “The digital ministry is a magnificent island,” she told POLITICO in an interview in the late summer. “It’s a place where everyone is warmly greeted — a luxury that I take advantage of.” 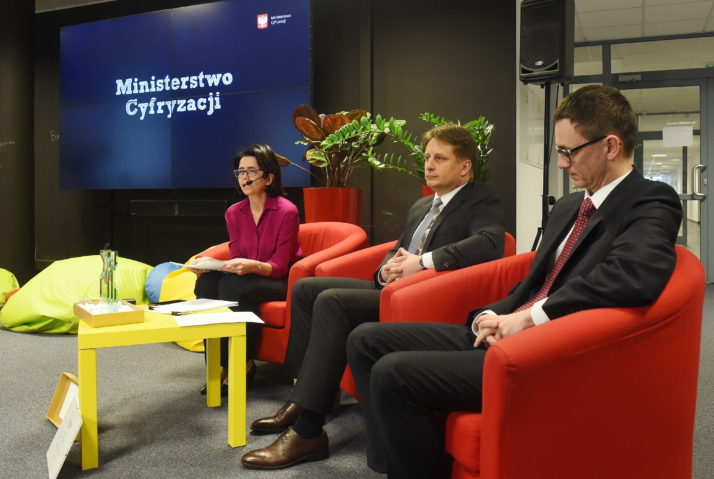 Most recently, Streżyńska refused deputy Prime Minister and Minister of Science and Higher Education Jarosław Gowin’s offer to join a newly formed “Christian Democratic” party titled “Porozumienie.” While he said he respected her decision, some speculate it has put her political future in jeopardy.

“It’s a plus and a minus,” said Michał Kanownik, the president of ZIPSEE Digital Poland, an industry employers’ association for consumer electronics and IT. “She doesn’t take part on political matters because she’s not a member of a political party, but also this weakens her position in the government itself.”

The government is tight-lipped about the future of the ministry. “Our work in the digital ministry is far too absorbing to occupy ourselves with rumors,” said Karol Manys, a spokesperson for the ministry, who declined to comment on any talk of the ministry’s dissolution or Streżyńska’s potential firing.

As the EU works to implement its sweeping data protection overhaul, the General Data Protection Regulation, the question of who would replace Streżyńska in the event of a reshuffle is a vexing one. Poland’s digital progress is still fragile and could be undone in the hands of a less ambitious minister, some say.

“Minister Streżyńska was the only one who was aware of the issues,” said Boni, the former Polish digital minister.

No other member of the Law and Justice government has the required expertise to advance Poland’s still developing digital agenda, he added. “They treat citizens in the digital world as individuals to be monitored.”

The timing is particularly bad, said Łukasz Olejnik, a Polish cybersecurity and privacy consultant. Splitting up or eliminating the digital ministry entirely at a time when the bloc gears up to implement landmark new regulation on data protection next spring “is very risky business.”

If Poland fails to pull its weight and properly implement the regulation on a national level, it’ll mean “chaos, paralysis and sadly, also humiliation,” he said.

Poland is already on the EU’s blacklist over disagreements on the rule of the law, migration and environmental protections. Adding digital policy to the list would dig Poland into an even deeper hole.

“It’s important that digital is one of the top items on the Polish political agenda” — Michał Kanownik, president of ZIPSEE Digital

Replacing Streżyńska would also be a blow because it would likely also mean getting rid of the digital ministry’s secretary of state Krzysztof Szubert, who deals closely with EU affairs and whom many in Brussels see as a positive influence on the bloc’s digital agenda. He is credited in the EU capital with leading important lobbying efforts — including putting digital policy on the agenda at European Council summits this year, and pressuring the Commission to relax rules on the free movement of data across EU borders.

The worst-case scenario for Poland would be a decision to scrap the ministry entirely, a move that would put digital policy in the hands of other EU countries and leave Poland in the dust.

“It would be a real shame if this very active and engaged and ambitious profile Poland has on digital were to disappear,” an official from one of the like-minded liberal countries said.

Others are more relaxed about Poland’s digital future and argue the government has done too little to push the digital agenda forward, even under Streżyńska.

Much of her work was simply a continuation of what the previous Civic Platform government had already put in place, two individuals supporting the opposition said.

“I don’t think she has been a particularly exceptional minister,” said one Polish individual working on EU digital politics, who spoke on condition of anonymity because of their involvement in the sector. “I don’t think swapping her out would be bad for Poland.”

For Kanownik, the head of ZIPSEE Digital Poland, the best thing for Poland’s tech agenda is not ruffling any feathers. If that means putting a right-wing Law and Justice loyalist in charge, so be it.

“It’s important that digital is one of the top items on the Polish political agenda,” Kanownik said. “It doesn’t matter who is at the top — whether it’s Streżyńska or someone else.”

It’s true that the upper echelons of the Polish government, including Prime Minister Beata Szydło, seem to have bought into Poland’s digital sales pitch. Szydło signed a letter including 17 EU heads of state asking to make digital a priority on the political level. She also claimed responsibility for helping to bring about this year’s Digital Summit in Tallinn, one of the first meetings where EU heads of state dedicated their time to discussing digital.

But some fear the political buy-in — and any hopes of Poland becoming a digital leader in Europe — will fall apart if Streżyńska leaves. Szydło could lose her job in any potential reshuffle, according to Polish media.

Streżyńska “guarantees the continuation of projects, like the development of 5G, because she initiated them,” said Agata Kowalczyk, head of communications for Startup Poland. “This is the element that awakens doubts … She had the right experience to put pressure on these technological, structural and telecoms matters.

“It’s hard to say if someone else in [Law and Justice] has these same competencies.”

How tech is winning the Trump era