Israeli forces on Saturday arrested the suspected killers of a Jewish settlement guard shot in a West Bank attack claimed by a Palestinian armed group that linked it to violence in Jerusalem.

Al-Aqsa Martyrs Brigade, one of the main militant groups active in the Israeli-occupied territory, claimed responsibility for the shooting which, along with the killing of a Palestinian, brought a deadly conclusion to a Friday marked by clashes at Jerusalem’s flashpoint al-Aqsa mosque compound.

The Israeli army said the guard was on duty at the entrance to the Ariel settlement on Friday night when attackers opened fire, fatally wounding him.

He was later identified as 23-year-old Vyacheslav Golev.

“After intense intelligence and operational activity by the [domestic security agency] Shin Bet, police special forces and the army, two suspects were arrested this evening,” police said after a daylong manhunt.

The armed pair were arrested in the Palestinian village of Qarawat Bani Hassan, north-west of Ariel, the army said.

“No terrorist will escape us,” the prime minister, Naftali Bennett, said after news of the suspects’ capture.

The defence minister, Benny Gantz, said on Twitter that “the state of Israel has always defeated terrorism and will do everything necessary … to defeat it today as well”.

The group which claimed the attack is the armed wing of Palestinian president Mahmud Abbas’s Fatah faction.

“We claim responsibility for the heroic operation in the colony of Ariel in which a Zionist officer was killed, in response to violations committed by the occupation government in Jerusalem,” the group said.

The army said it had stepped up its presence in the West Bank, with security forces making arrests and seizing weapons in Bruqin, west of Ariel, and in the Balata refugee camp near Nablus.

The Palestinian health ministry said a Palestinian was shot dead overnight on Friday in an Israeli army operation in the northern West Bank town of Azzun, 12 miles from the Ariel settlement.

An army spokesperson told AFP the operation was linked to the hunt for the Ariel attackers.

Palestinians and Israeli soldiers clashed after Adwan’s funeral on Saturday, with the Red Crescent saying three Palestinians were shot in the legs with live fire.

The Israeli army said “dozens of Palestinians instigated a violent riot adjacent to the town of Azzun” and attacked soldiers “who responded with riot dispersal means and live fire”.

The West Bank violence came after 42 people were hurt in clashes on Friday between Palestinians and Israeli police at the al-Aqsa mosque compound, a site venerated by Muslims and Jews, the Palestinian Red Crescent said.

That unrest came on the last Friday of the Muslim holy fasting month of Ramadan, and brought to nearly 300 the number of Palestinians injured over a two-week period in clashes at the site.

The al-Aqsa mosque compound is in East Jerusalem, which Israel captured in the 1967 six-day war, along with the West Bank, and later annexed, in a move not recognised by most of the international community.

Israel has since built settlements in the West Bank that are considered illegal under international law but are home to about 475,000 Israelis.

The violence in East Jerusalem has raised fears of another armed conflict similar to an 11-day war last year between Israel and the Islamist movement Hamas that rules Gaza, triggered in part by similar unrest at al-Aqsa.

Hamas warned Saturday of attacks on synagogues and a “great battle” if Israeli forces carry out another raid on al-Aqsa mosque.

“Whoever takes the decision to repeat this scene [of a deployment inside the mosque] will be taking the decision to destroy thousands of synagogues across the world,” said Yahya Sinwar, the Hamas chief in the Gaza Strip.

The al-Aqsa tensions followed wider violence since 22 March in Israel and the West Bank.

Thirteen Israelis, including an Arab-Israeli police officer, and two Ukrainians have been killed in separate attacks, two of which were carried out in the Tel Aviv area.

A total of 27 Palestinians and three Israeli Arabs have died during the same period, among them perpetrators of attacks and those killed by Israeli security forces in West Bank operations. 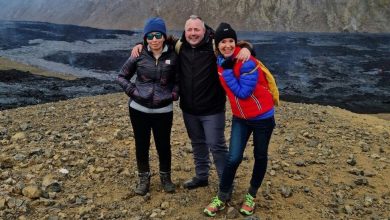