‘Hard Brexit’ has the financial markets wobbling. But if Jeremy Corbyn leads the Labour Party to victory and slaps socialism back on the agenda, they could come crashing down. That’s according to a top US investment bank.

Britain and the EU are no closer to striking a deal, making a hard Brexit ever more likely. But Morgan Stanley has other concerns. It is warning clients there is a two-thirds likelihood of the UK going through yet another election next year, and the business-friendly Tories are on the ropes.

“We could see the biggest shake-up in the political backdrop since the Seventies. This is much more scary from an equity perspective than Brexit,” Graham Secker, the bank’s chief European equity strategist, told the Telegraph.

Amid claims that bond investors in the UK are losing at a more rapid pace than anywhere else in the world, concerns have been raised over how the stock markets will react if Corbyn finally gets to implement his “labor over capital” policies.

Andrew Sheets, the bank’s global asset strategist, warns that fund managers must come up with contingency plans in case the red menace gets his hands on the controls and rolls out his renationalization policies, bringing power utilities, water companies, mail delivery, and rail transport back into public ownership.

Corbyn has pledged to raise corporate tax to 26 percent, impose a surtax on financial entities, tax financial transactions and introduce the so-called ‘Robin Hood’ tax on derivatives, bonds, and also shares. Not quite gulags and collectivization, but enough to rattle a few bankers who have enjoyed the laissez faire policies of successive UK governments. 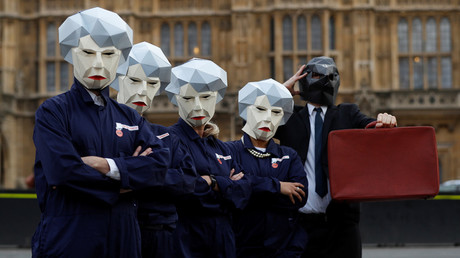 Secker says Prime Minister Theresa May must urgently strengthen the Tory government’s position to see off the Corbyn challenge. “Even if we see good progress in the Brexit negotiations, the scope for UK sensitive assets to rally may be muted, unless we also see an improvement in the Government’s position in the opinion polls,” he said.

Emma Marcegaglia, head of the pan-EU lobby BusinessEurope, warns businesses are already considering withdrawal from the UK. “What Corbyn proposed during the election campaign is not pro-business, that is for sure,” she said.

“There would not be a good outcome even if there is a fantastic free trade agreement. We had a meeting of 24 CEOs along with the Japanese last week and the feeling was that the situation is very bad.

“Some companies will start to activate their contingency plans even before March: that could be to stop investing, or leaving the UK altogether. I have to tell you that our European members are pretty united, more than I thought they would be,” she said.

‘He only had a fever’: Nine-month-old boy contracts coronavirus