Hate crimes were up by 17 percent in the United States between 2016 and 2017, the first year of Donald Trumps presidency, according to new data from the Federal Bureau of Investigation.

In a report released Tuesday, the FBI said 7,175 hate crimes were reported by law enforcement agencies across the country last year, up from 6,121 in 2016.

Thats the highest number of hate crimes reported in the country since 2008, the year Barack Obama was elected to his first term as president, AFP reported.

"The scourge of hate crime continues to harm communities in cities and states across the country. The FBI data confirm the reality we all know: hate is increasing in America," said Maya Berry, executive director of the Arab American Institute, in a statement.

Race was the primary motivator for hate crimes in 2017, with black people being the most targeted group in the US, the FBI report found, while hate crimes were also reported on the basis of religion and sexual orientation.

Jews were the victims in 58.1 percent of all religiously-motivated hate incidents.

About 5,000 hate crimes targeted individuals, in the form of harassment or assaults, while about 3,000 were crimes against property, such as graffiti or robbery.

The report marks the third consecutive annual increase in the total number of hate crimes across the country.

It is also "the greatest single-year increase reported since 2001, when hate crime targeting Arab Americans and American Muslims, and those perceived to be Arab or Muslim, surged in the aftermath of 9/11", the Arab American Institute said.

But the Washington-based advocacy group said the FBI's report omitted "three of the most severe acts of bias-motivated violence committed last year", and noted discrepancies between hate crimes recorded at the state and federal levels.

"The hate crime reporting system we have in place is failing to respond adequately to hate crime," Berry said.

"It is clear the Trump administration has largely abdicated from the stated federal interest of eradicating bias-motivated violence, and the presidents rhetoric has at times appeared to exacerbate its spread."

Matthew Whitaker, the acting US attorney general, said the FBI report "is a call to action—and we will heed that call".

“I am particularly troubled by the increase in anti-Semitic hate crimes—which were already the most common religious hate crimes in the United States—that is well documented in this report," he said in a statement.

The FBI didn't say what caused the increase in the number of hate crimes for 2017. However, about 1,000 additional law enforcement agencies contributed to the report, compared to 2016, the agency said.

The statistics come amid growing divisions in the US and calls for the president to condemn white nationalists, who Trump's critics say have been emboldened by the rhetoric and policies coming from the White House. 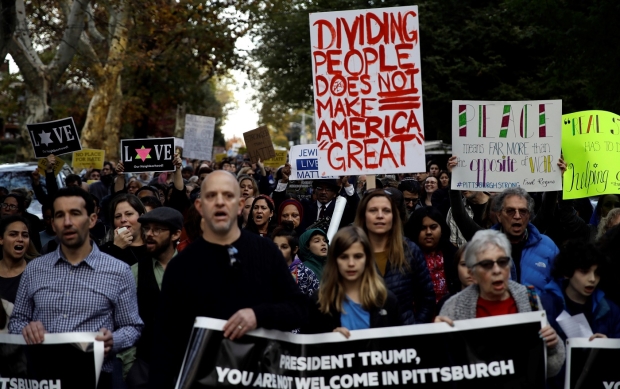 Trump has been accused of stoking racist, white nationalist ideologies in the US (AP)

They also were released less than a month after a gunman opened fire on a Pittsburgh synagogue on 25 October, killing 11 congregants.

The suspected shooter, Robert Bowers, posted anti-Semitic messages on social media before the attack and accused a Jewish refugee resettlement agency of bringing migrants, whom he described as “invaders”, into the US.

Trump was asked not to go to Pittsburgh to pay his condolences to the victims of that shooting until he denounced white nationalists.

“You yourself called the murderer evil, but yesterdays violence is the direct culmination of your influence,” a progressive Jewish group, Bend the Arc, said in an open letter at the time.

Of the 1,749 victims of anti-religious hate crimes in 2017, 18.6 percent of the victims were Muslims, the FBI report also stated.

Trump has been accused of stoking anti-Muslim hatred with his rhetoric and policies, such as a ban on the entry into the US for citizens of several Muslim-majority countries.

The FBI data confirm the reality we all know: hate is increasing in America

Last month, the president also said "unknown Middle Easterners" had infiltrated a caravan of US-bound migrants, an unproven claim that was quickly denounced as Islamophobic and racist.

Earlier this year, the Council on American-Islamic Relations (CAIR) released its own report on anti-Muslim hate crimes in the US, recording a 17-percent jump in anti-Muslim bias incidents nationwide and a 15-percent increase in hate crimes targeting American Muslims.

“Of particular alarm”, however, was “the fact that federal government agencies instigated 35 percent of all anti-Muslim bias incidents” recorded last year, the group said.

“This represents an almost unprecedented level of government hostility toward a religious minority within the United States, and is counter to the American value of religious freedom,” CAIR said.

Macron’s top Brexit aide: UK must not ‘export its political crisis’ to Europe